Coefficient of thermal transmittance (U value)

Using the multi-function measuring instrument model 435, the U-values as well as the smallest air flow velocities, such as occur at badly sealed windows, can be reliably measured.
With the new, patented U-value probe, the other necessary temperatures can be recorded with only one probe. 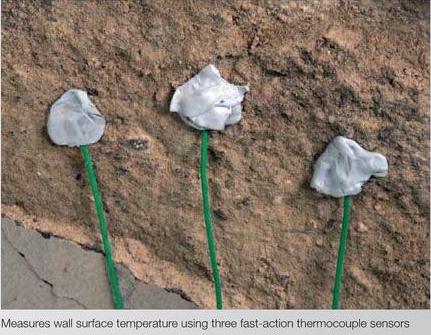 In order to measure the surface temperature, the three wires of the U-value probe are attached to the inside wall with modelling clay.The air temperature is determined via a sensor in the probe plug. The three required temperatures are recorded by the connected temperature probes and transferred. The instrument then calculates the U-value from them, and shows it directly in the display.
Flow velocity measurement

With the 435, in combination with a thermal measurement probe, it is also possible to detect the smallest airflows in rooms, e.g. from poorly sealed windows and electrical sockets. The accurate hot wire probe detects even the smallest airflow velocities.