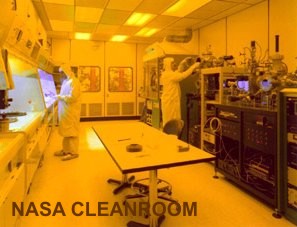 A cleanroom is an environment, typically used in manufacturing or scientific research, that has a low level of environmental pollutants such as dust, airborne microbes, aerosol particles and chemical vapors. More accurately, a cleanroom has a controlled level of contamination that is specified by the number of particles per cubic meter at a specified particle size. To give a perspective, the ambient air outside in a typical urban environment might contain as many as 35,000,000 particles per cubic meter, 0.5 μm and larger in diameter, corresponding to an ISO class 9 cleanroom.

Cleanrooms can be very large. Entire manufacturing facilities can be contained within a cleanroom with factory floors covering thousands of square meters. They are used extensively in semiconductor manufacturing, biotechnology, the life sciences and other fields that are very sensitive to environmental contamination.

The air entering a cleanroom from outside is filtered to exclude dust, and the air inside is constantly recirculated through high efficiency particulate air (HEPA) and ultra low penetration air (ULPA) filters to remove internally generated contaminants.

Staff enter and leave through airlocks (sometimes including an air shower stage), and wear protective clothing such as hats, face masks, gloves, boots and cover-alls as they are a major source of contamination in the cleanroom. .

Equipment inside the cleanroom is designed to generate minimal air contamination. There are even specialised mops and buckets. Cleanroom furniture is also designed to produce a low amount of particles and to be easy to clean.

Common materials such as paper, pencils, and fabrics made from natural fibers are often excluded; however, alternatives are available. Cleanrooms are not sterile (i.e., free of uncontrolled microbes) [1]and more attention is given to airborne particles. Particle levels are usually tested using a particle counter.

Some cleanrooms are kept at a positive pressure so that if there are any leaks, air leaks out of the chamber instead of unfiltered air coming in.

Some cleanroom HVAC systems control the humidity to relatively low levels, such that extra precautions are necessary to prevent ESD electrostatic discharge problems. These ESD controls ("ionizers") are also used in rooms where ESD sensitive products are produced or handled.

Low-level cleanrooms may only require special shoes, ones with completely smooth soles that do not track in dust or dirt. However, shoe bottoms must not create slipping hazards (safety always takes precedence). Entering a cleanroom usually requires wearing a cleanroom suit.

In cheaper cleanrooms, in which the standards of air contamination are less rigorous, the entrance to the cleanroom may not have an air shower. There is an anteroom, in which the special suits must be put on, but then a person can walk in directly to the room (as seen in the photograph on the right).

Some manufacturing facilities do not use fully classified cleanrooms, but use some cleanroom practices together to maintain their cleanliness requirements.