Oxygen Deficiency in confined spaces: Is it Safe to Enter?

Injury or death due to oxygen deficiency is a common hazard in many industries. Toxic gas is often to blame when workers die unnecessarily due to asphyxiation in environments where the oxygen is actually depleted by gases such as nitrogen. To prevent these accidents, government and other agencies have implemented numerous regulations, required procedures, permit processes, as well as enforcement actions.

Breathing air contains 21% Oxygen. If the Oxygen decreases by as little as 1.5%, the human body will be affected.
Reduced Oxygen is also believed to have long-term detrimental affects on the human body.

These values are approximate and may vary depending on an individual’s health, physical activity and the specific working environment that they encounter.

Examples of confined spaces include:

Magnetic Resonance Imaging (MRI) machines use a powerful magnetic field to produce 2D or 3D images of the internal human body. Liquid helium is used to cool the superconducting magnets in the MRI machines. If a coolant leak occurs, the helium can displace the oxygen (O2) in the environment, creating a dangerous situation for the people in the room. A continuous oxygen sampling system needs to be in place to monitor for potential oxygen deficiency levels to ensure the health and safety of patients and staff in the room.

By detecting leaks early, the danger to the occupants in the room from O2 deficiency and additional costs due to inefficiencies in the MRI unit can be reduced.

The strong magnetic field inside MRI rooms can interfere with electronic equipment inside the room and cause it to malfunction, therefore the Sigma 95H-A oxygen monitor should be mounted on the wall outside of the MRI room with flexible tubing running from the inlet port fitting to the area where a leak is most likely to occur inside the MRI room. The will constantly monitor the target area air, indicating the real time Oxygen levels on the LCD display. Normal Oxygen levels in a room with good air exchange are approximately 20.8% to 21.0% volume. The 95H-A oxygen monitor can be configured with a low alarm and high alarm set-point depending on the application requirements. The 4-20 mA output can be connected to the Building Automation System (BAS) which in turn can switch on the emergency ventilation system or exhaust fans and the relay can be configured to turn on a remote strobe inside the MRI room when an alarm is triggered. For example, if configured with a low alarm setpoint, when the Oxygen level drops below 19.5%, Channel 1 LED will turn amber, the loud side mounted buzzer will sound, a 4-20 mA signal will be sent to the BAS and Relay 1 will be de-energized, triggering the actuation of the remote strobe. The buzzer can be silenced by pressing the “Silence” push-button.

Please note that as the number of MRI machines in use has risen to over 25,000 this makes MRI machines the #1 users of liquid helium in the world.

Sigma has both fixed installation monitors and hand held units. 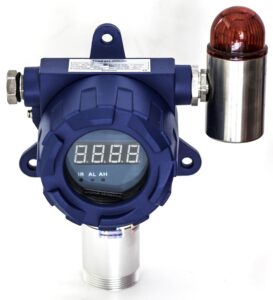