Water supply is a critical human need. It affects our life every day, and access to water is essential to basic health needs, food security, economic activities such as agriculture, food processing and manufacturing, sound environmental development, and poverty reduction.

97% of the world`s water supply is seawater. Of the remaining 3%, 2.5% is frozen. This leaves only 0.5% available as fresh water for mankind to share with earth`s other inhabitants.

By 2025, 1 800 million people will be living in countries or regions with absolute water scarcity, and two-thirds of the world population could be under stress conditions.
Source: FAO

Water use has been growing at more than the rate twice of population increase in the last century.
Source: Food and Agriculture Organization of the United Nations (FAO) and UN-Water

Over 1.4 billion people currently live in river basins where the use of water exceeds minimum recharge levels, leading to the desiccation of rivers and depletion of groundwater.
Source: Human Development Report 2006

In 60 percent of European cities with more than 100,000 people, groundwater is being used at a faster rate than it can be replenished.
Source: World Business Counicl For Sustainable Development (WBCSD)

When did you last attempt to measure your company`s environmental impact?

What size is your water footprint?

A Fresh Solution for Desalination

Desalination is a process, which removes minerals (like salt) and contaminants from water. Reverse Osmosis Desalination of sea water is a process that passes salty solutions through membranes under pressures between 55 – 65 bar, to produce fresh water. Substantial amounts of energy are required to produce this pressure amounting up to over 70% of all operational costs.
The disproportionate reliance on energy makes desalination dependent on an electrical energy infrastructure and in particular, exposes it to political and/or financial risks associated with conventional energy supplies needed in remote regions.

Years of experience resulting in a patented technology that uses wave energy to produce fresh water with no energy costs and zero emissions. How does it work? Wave converters extract the energy available from waves as small as 1 meter, to deliver pressurised sea water that can be directly coupled to an off-the-shelf desalination component to produce desalinated fresh water. We call it wave2water.

wave2water`s innovative core is the offshore part. This consists of a farm of patent protected wave energy converters. Each converter comprises of an ultra-light float on the sea surface fastened to a special piston, which in turn is fastened to moorings on the seabed. As the float is lifted by the passing waves, it extends the piston held down by moorings on the seabed, which is filled with water. This forces the water out of the piston and to shore using a submarine hose under the pressure necessary for desalination. Tension coil springs bring the piston back to its initial position, as the wave passes, at which point the piston is re-filled with water again for the next wave. 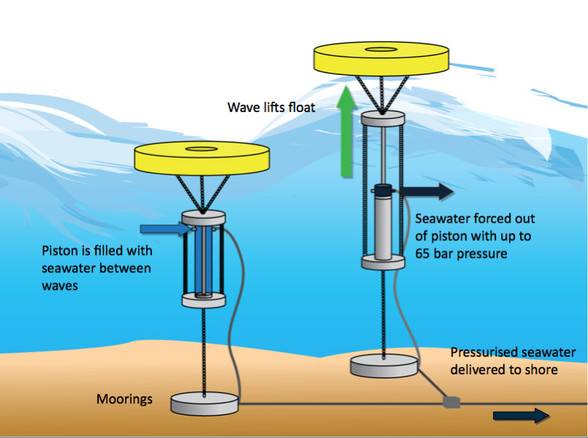 Once the pressurised seawater is produced, it needs to be delivered to the RO unit. The most effective alternative is to transport the seawater using a submarine thermoplastic hose especially designed to withstand the corrosive environment with an operating pressure of 80 bar.

As RO membranes ideally require a constant flow and pressure, once the incoming pressurised seawater reaches the shore it is stored in a specialised, stainless steel hydraulic accumulator designed to dampen pressure fluctuations of corrosive fluids such as seawater.

Savings can be made with a simplified desalination component stripped of all the electrical energy parts (motors, pumps, turbines and generators) necessary to produce the pressure, as this already provided for. This reduces the overall desalination system’s cost, complexity and maintenance requirements.

It provides an autonomous, sustainable water supply
It can be used worldwide, including remote regions and regions with small waves
It has a simple design, which reduces system complexity & keeps maintenance costs low
It can be deployed at sea in all wave conditions
It is scalable to meet any demands
It makes extensive, large scale desalination possible