OPACITY OF EMISSIONS FROM COMBUSTION SOURCES

Opacity The amount of light obscured by particulate pollution in the air; clear window glass has zero opacity, a brick wall is 100 percent opaque. Opacity is an indicator of changes in performance of particulate control systems.

Public awareness of environmental pollution, especially the release of toxic pollutants, is increasing. Continuous monitoring systems are used to provide assurance that a facility is not emitting pollutants in excess of its standards.

Modern methods for opacity measurement still use the darkness of the stack gases to measure the amount of smoke or dust emitted within the exhaust gases.
Our opacity monitors use the light transmission technique to measure the visible opacity of exhaust gas in a duct, stack or flue, in which a high intensity light beam is projected across the stack. Any dust, smoke or particulate present will attenuate the transmitted light and the decrease in light intensity, due to absorption and scattering, is measured.

One advantage of opacity systems is that they are insensitive to interference from other flue gas components since the beam spectrum is within the photopic region (400-700 nm) and most other flue gas constituents do not absorb in this spectral region.

There are two types of opacity monitors; Single Pass and Double Pass. 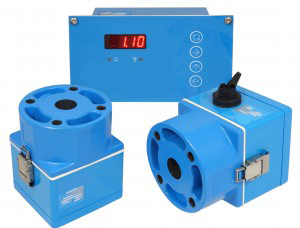