Automated processes require sensors for supplying information.
They provide signals about positions, limits, levels or serve as pulse pick-ups. Without reliable sensors even the best controller is not able to control processes.
In general, all these sensors consist of two parts: The first registers the change in the physical conditions (basic sensor), the second converts the signals of the basic sensor into electrical output signals (signal processing).
In general, a distinction is made between binary sensors which provide a defined high-low signal and analogue sensors which are preferably used for temperature, distance, pressure, force measurement, etc. The sensor supplies an analogue signal which is further analysed for measurement and control. 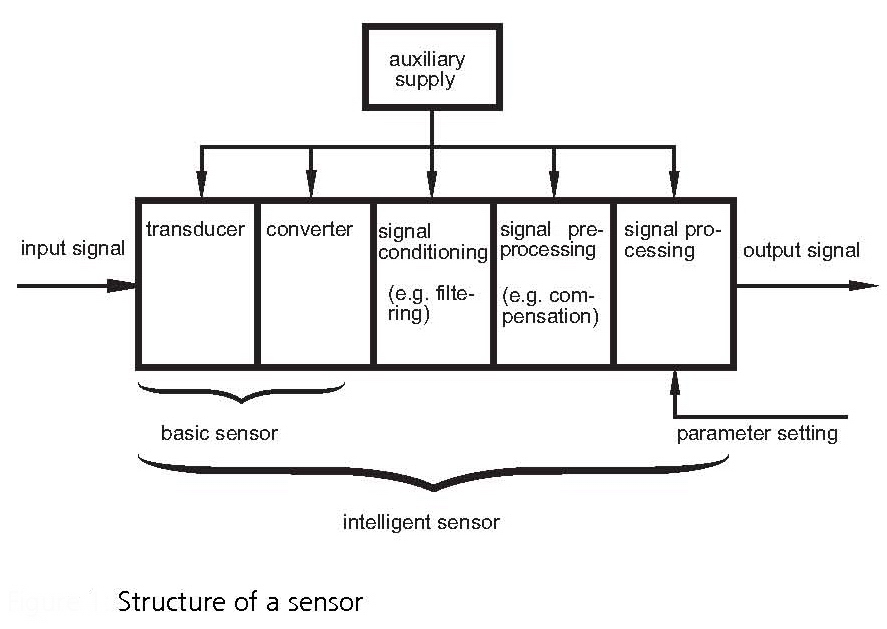 In the figure above you see the general diagram which basically applies to every sensor. The sensors only differ in some details, e.g. individual
components are not used or cannot be used separately. Sometimes the basic sensor is also called just sensor. In this case it must be seen from the context whether the whole unit or the basic sensor is meant. Some units consist of separate components, e.g. NAMUR sensors or often also temperature sensors.

Here the transducer is connected to a separate evaluation unit or amplifier.
In Figure above the characteristic feature of the intelligent sensor is its communication capability. But this term is also used in a different sense.
A sensor which only supplies the binary information object detected or object not detected is in general not called intelligent. But a sensor which is able to supply additional information, e.g.
object reliably detected or
object unreliably detected
is considered to be intelligent.

In order to avoid misunderstandings the difference is briefly explained.
Binary means "two states" (on/off). An analogue signal which can have any value within certain limits is often digitized today so that it can be processed in electronic controllers. This is done using an A/D converter (analogue to digital). It divides the analogue signal into steps. The number of steps results from the number of the bits used. Whereas one bit can only take two values, 8 bits can take 256 and 10 bits 1024. This is also called resolution. Less than 8 bits are seldom used because the resolution would then be too coarse. More than 12 bits are also seldom used because it does not make sense if the resolution is much higher than the measurement accuracy.
Encoders are an exception. They provide digital signals straight away.

In this product section we have binary sensors which include inductive, capacitive, magnetic, opto, ultrasonic.