Available for the first time, a product that interlocks the trailer to the loading bay ensuring drive-away cannot occur during loading and unloading. All at a fraction of the cost of the existing solutions on the market.

A product that prevents drive-aways at loading bays and reduces the dependency on written procedures. The drivers can retain their keys and above all, the loaders are in control of the situation at all times.

The device ensures the loading bay doors cannot be opened until a trailer is in place, reducing the likelihood of unauthorised access into the building via an open bay door.Improves Loading Efficiency
Additional to the increased safety, it has also been seen to improve the efficiency of the loading operation through improved communication between the yard and the loader with device giving the loader immediate indication that the trailer is ready for loading. Also, a previously unrecognised advantage of implementing this device is the security aspect.

What, Why, How?
What is it and what does it do? 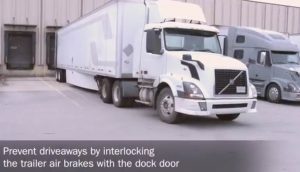 The device offered by Sigma prevents the unauthorised movement of an articulated trailer during the loading or unloading of goods at a loading bay.
Why would I need such a product?

Because accidents happen. A number of high profile accidents and near misses occur every year in the logistics industry.

A driver reverses up to a loading bay.
The loader starts to unload the delivered goods.
The driver realizes he has trapped his vehicle number plate, so gets back into the cab to pull the trailer forward. This happens just as the loader is reversing out of the trailer.
Consequence, loader falls through the gap.

How is it different from what’s on the market already?

The device forces the operator / driver to carry out tasks prior to the loading process beginning. The device removes the human error element. Most existing safety products used in the loading bay industry are procedure controlled, i.e. they should be used but nothing forces them to be implemented.

A typical example would be the use of wheel chocks. They SHOULD be put in place prior to the loading operation but it relies 100% on the operators integrity and the company’s enforcement of the procedure.

The Device links the articulated trailer to the loading bay door during the loading or unloading of goods. 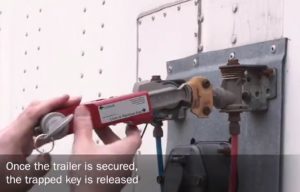 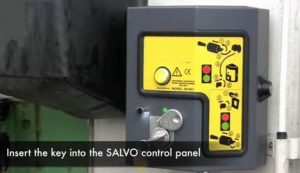 The Device is fitted to the emergency air brake line coupling when the trailer has been reversed into position at the bay. After successful fitment, one of our coded keys is released from the Device, locking the unit firmly onto the coupling. The coded key can only be released once the Device has been fitted to the brake coupling.
The coded key is then taken to the corresponding loading bay door and used to open the door. Full system options can be viewed in the IOM and the animation section. 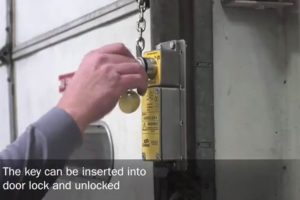 The secret of the system is that only one key exists per bay, thus ensuring that the door can only be opened ONCE the trailer has been secured in place. To ensure the integrity of the system, each bay will have a different code. 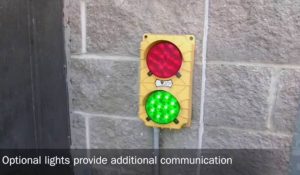 The System has such flexibility that a number of different options are available to link the door to the trailer,
dependant upon the working practices of the site, the door locks can vary from a mechanical only lock to a solenoid controlled electrical lock. The final design will be decided upon completion of a site survey.

We have added a new component to our range of drive-away prevention systems, the Chock. The unit removes the risk of accidental drive-aways occurring during loading operations by forcing operatives to chock vehicles before loading can begin.

The Chock introduces discipline into the chocking procedure by interlocking the chock to the loading bay. If the chock is not correctly fitted, the bay door cannot be opened. Like all of the existing products in our range, the Chock relies on our time-proven trapped-key technology. Once the driver has positioned the vehicle at the bay, the chock is collected and positioned. Depressing the foot pedal three times clamps the two halves of the chock together around the wheel and releases the trapped key. 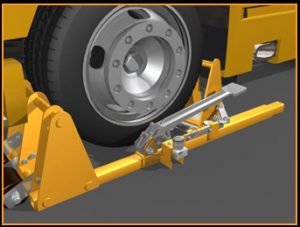 The Chock is now tightly clamped and cannot be removed unless the coded key is reinserted.

The key is transferred to the control switch located at the loading bay, which will allow the loader inside the warehouse to open the door.

To remove the Chock, the loader must first close the loading bay door. The driver can then remove the key and return to the chock. Inserting the key will enable pumping of the pedal to release the pressure and subsequent removal of the chock. It should be noted that the key cannot be removed while the chock is in its free state.