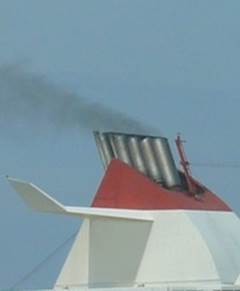 Annex VI of MARPOL 73/78 and the NOx Technical Code is applicable to every ship over 400gt and every fixed and floating drilling rig and other platforms.

The new rules, have set limits on sulphur oxide (SOx) and nitrogen oxide (NOx) emissions from ship exhausts. Deliberate emissions of ozone depleting substances are also prohibited.
A global cap of 4.5% m/m on the sulphur content of fuel oils has been introduced, with observance to be monitored by the IMO. Furthermore, provision has been made for creating special ‘SOx Emission Control Areas’ (SECAs) in environmentally sensitive areas with very strict rules: for example fuel with sulphur content no higher than 1.5% m/m or the fitting of exhaust gas cleaning systems. In the current Annex VI, there are two SECAs designated, namely, the Baltic Sea and the North Sea area, which also includes the English Channel.

NOx emissions are a complex problem because they are created as by-products of fuel combustion in diesel engines. In the past the engines were optimised for minimal fuel consumption, now with the new Annex VI rules it means that performance must be trimmed to reduce those emissions.
A compulsory NOx Technical Code, (developed by IMO), specifies the way this is done and was adopted by the Conference under the cover of Resolution 2.
The Code applies to all engines >130kW installed on ships built after January 1, 2000 and all engines that have or will undergo a major conversion after that date. Specific NOx emission limits vary according to engine speed.

Application for ships keel-laid before 1 January 2000

The Code requires the engine to be surveyed every year, in order for the Flag Administration (or class on their behalf) to issue an International Air Pollution Prevention (IAPP) Certificate. This can be done either by a surveyor or with direct measurement and monitoring with data stored being available for inspection or given to the authority. The direct measurement is offering additional benefits of optimising engine performance which will result in fuel savings.

In April 2008 The Marine Environment Protection Committee (MEPC) of the International Maritime Organization (IMO) has approved proposed amendments to the MARPOL Annex VI regulations to reduce harmful emissions from ships.

Progressive reductions in nitrogen oxide (NOx) emissions from marine engines were also agreed, with the most stringent controls on so-called "Tier III" engines, i.e. those installed on ships constructed on or after 1 January 2016, operating in Emission control Areas.

The revised Annex VI will allow for an Emission Control Area to be designated for SOx and particulate matter, or NOx, or all three types of emissions from ships, subject to a proposal from a Party or Parties to the Annex which would be considered for adoption by the Organization, if supported by a demonstrated need to prevent, reduce and control one or all three of those emissions from ships.

What is NOx?
NOx is a term used to describe nitrogen oxides. NOx is a reactive gaseous compound that is one of the criteria air pollutants regulated by MARPOL ANNEX VI NOx Technical Code. The two primary oxides of nitrogen involved in air pollution are NO and NO2. Nitric oxide (NO) is colorless and essentially odorless. Nitrogen dioxide (NO2) is a reddish-brown gas with a pungent smell. NOx (NO & NO2) can irritate the lungs, cause bronchitis and pneumonia, and lower resistance to respiratory infections. NOx is also a precursor to the formation of ground level ozone (smog) and a contributor to acid rain. NOx emissions are produced during the combustion of fuels.

The MEPC agreed amendments confirming the proposed three-tier structure for new engines, which would set progressively tighter nitrogen oxide emission standards for new engines depending on the date of their installation. Tier I applies to a diesel engine which is installed on a ship constructed on or after 1 January 2000 and prior to 1 January 2011 and represents the 17 g/kW standard stipulated in the existing Annex VI.

The draft amended NOx Code includes provisions for direct measurement and monitoring methods, a certification procedure for existing engines, and test cycles to be applied to Tier II and Tier III engines.

15 July 2011: Mandatory measures to reduce emissions of greenhouse gases (GHGs) from international shipping were adopted by Parties to MARPOL Annex VI represented in the Marine Environment Protection Committee (MEPC). The amendments to MARPOL Annex VI Regulations for the prevention of air pollution from ships, add a new chapter 4 to Annex VI on Regulations on energy efficiency for ships to make mandatory the Energy Efficiency Design Index (EEDI), for new ships, and the Ship Energy Efficiency Management Plan (SEEMP) for all ships.